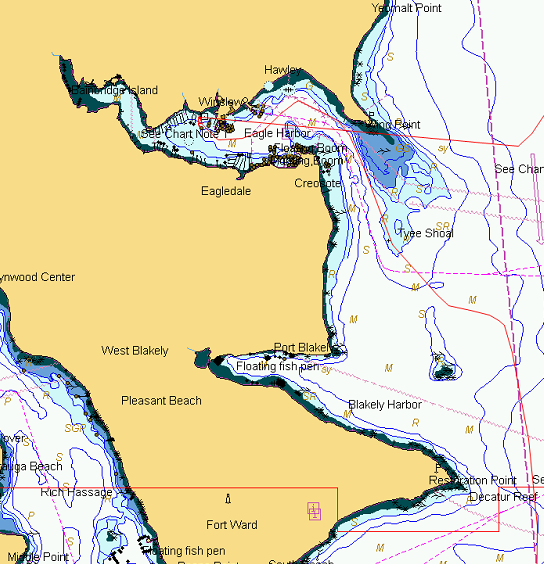 It’s time to leave Gig Harbor.  Unfortunately, the weather for the next couple days looks to deteriorate so I have made the decision to head back north.  Instead of making it a one day cruise, seven plus hours at that, I thought maybe I’d make a stop along the way.  Candidates were Blake, Eagle harbor, Bell Harbor or Kingston.    I ran up Colvos passage and had a nice run of it.  Thinking that I had never been into Eagle Harbor, I decided to check it out and headed for the public dock.  There was a bit of action as a couple sailboats behind me were getting the 5 blasts from the ferry and I turned and noted that these two crazies were running smack in the middle of the route and not even trying to get out of the way.   Then they turned and were going gangbusters for the public dock.  I was laying a boatlength off of it and singlehanding was busy putting out fenders and lines.  There was quite a bit of room on the dock and I shouted to one of the sailboats that I was going to grab a spot, but he should go ahead and get tied up and not wait for me.  He thanked me and went and tied up.  The other boat then cuts between me and the dock and takes the other spot.  I’d like to say this kind of behavior with sailboats was rare, but its not.  Thankfully the passengers on the 2nd sailboat had a mini mutiny with the captain, ahem…skipper,  and then pulled him back to raft alongside the 1st boat and I was able to moor.

Being all tied up, I took a short stroll around town.  There are a few pubs and a small marine store.  A quaint little harbor.  As I turned back toward the boat, the wind started blowing.  The weather I had hoped would hold off for another day looked to be  making an early showing.  I got back to the boat and decided I’d rather go ahead and head toward home than spend a bouncy night at the public dock.

My single handed exit went smoothly and before taking final leave from Eagle Harbor I did a short tour around the bay.  A few of the water rat boats I recognized from articles I have followed, but somehow in person it was just different than what had lived in my imagination.  Too bad Dave Berry is no longer around.  You can read more about the plight of the water rates in the below link.

The remaining trip was uneventful, though I did find myself navigating out of the harbor via iphone as the GPS took its sweet time aquring a signal.  Note on the chart above that it looks like I took a straight shot out of the bay.