Coming home from telegraph is a long haul at 8 knots. I decided to clear customs at Roche so I would have some options and not have to worry about making anacortes at any particular time frame.

I ran into Gary on Done Workin on his way out of Roche. Looks like we both had an efficient clearance. Heading towards wasp passage I decided to check out Jones island which I have not actually stopped at in about ten years. Jones of course is famous for it’s friendly small deer and equally aggressive raccoons.

The park dock was open so I decided spending the night was a much better plan than going home. I scrounged dinner out of what ever was left in the pantry and tried out the new halo on the xbox. Home can wait another day.

Incidentally the docks noted to be gone by 9am the next morning as they were being replaced. It will be interesting to see what the replacement looks like as the existing docks were still in good condition

Spent Friday and sat in telegraph harbor with the Canadian Tolly cruisers. Rhonda took Friday off and drove up with her dad. We had a great time. The Tolly cruisers really know how to put on a great event.

For those who have never been to Wallace, it has a rather unusual custom.  There is a small hut where over the years, individual boaters have left their mark on a piece of driftwood and over time, they have accumulated.  Now, there are thousands.  Well…a thousand and one…:) 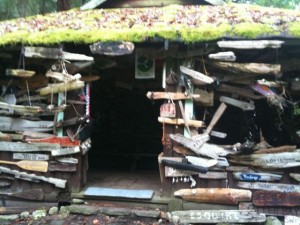 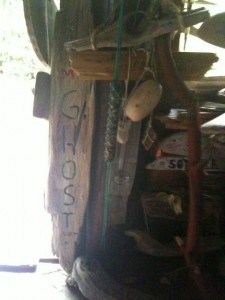 Thursday morning has me waking up in the hands of bandits. Little furry four legged bandits wearing masks. I’m counting a dozen raccoons pillaging the beach this morning

I left Anacortes yesterday at 9am. The water was calm but sometimes nearly foggy. A sort of thick spooky haze though I had visibility of nearly six miles. Not bad. I found myself fighting the current and burning unplanned fuel through the morning as I wound my way through Thatcher pass, past Upright head then squirting into San Juan Channel through Wasp Passage. The thick haze continued across the open expanse of Boundary Pass where my timing of commercial traffic was perfect as a freighter just rounded Turn point out of view as I crossed. There is good network coverage at the South end of Boundary so I used shipfinder on my iPhone to look for any upcoming AIS targets out of sight and found none, radar confirmed the same so away I went.

I was able to clear Canadian customs in Bedwell without fanfare. I bet I was not tied up at the docks for more than 15 minutes before being on my way again. While the currents eased up the trip wound up at around 7.5 hours.

Conover cove is a pretty tight and shallow spot. Jollymon, Enough time, and Go Dot were at the dock. I took the last stern tie to the west and anchored up. Steve Monrad was nice enough to come out in the rain and run out my stern line for me. That was fantastic. I thoroughly sounded 10 foot of depth around my anchorage before getting secured. I looked up tide for chemainus and found we would only be losing 4 feet of water. Later dock talk suggested the real number was 7 feet, leaving her keel in the mud. I sunk a lead line before going to bed and found I actually had 12 feet under my keel and those two extra feet matter. This morning I lead line about 5 feet. Wondering what is going on with tides and currents pro which shipped with Nobeltec I investigated further this morning. I found two different tide stations for chemainus, one agreed with other nearby stations the other was clearly wrong. Both shared the same lag/long. The moral of this story is to check more than one station as clearly mistakes in the information are possible. 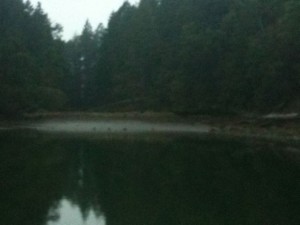 We are spending the labor day weekend on the boat in her slip at Anchor Cove marina.  On Sunday we had lunch at the Wheelhouse and then took the dogs up to the viewpoint at Cap Sante.  Lots of boats going in/out of Cap Sante marina and a great view point.  The dogs love trekking over the rocks. 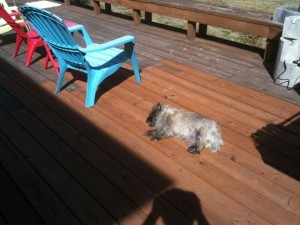