We made the run from Hunter to Cornet Bay with clean water.  Spent the night on the floating park docks.  We picked up some nice crab, but lost one of our pots to either the raging current or a ragin theif, not positive which but another pot in the current came through just fine.

We arrived in sunshine, but later that afternoon the fog came creeping into the bay through Deception and within just a few minutes we went from sunshine to dense fog.  A decent sized double masted sailboat came into the bay, which was also named Ghost.  She seemed to me the spitting image of the boat from the movie Captain Ron.  Later investigation on my part revealed that she in fact was a Formosa 51, which is the boat that was used in the movie.  Very classy and they chose a great name for her.  I did not get a chance to talk to them as they were at the “other” floating dock.  I did find their website here:  http://www.ghostsailors.com/

It’s hard to find a good reason to depart Garrison bay, but off we go!  Jollymon has to return to work, so Cliff and I continued on our way looking for our next stop.  We wound up in Hunter bay, one of Jollymon’s favorite’s.  We put the hook down with plenty of room around us, but the wind here in Julyuary is coming up again. 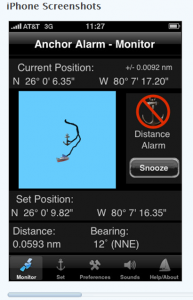 As busy as Reid Harbor was, we made a short trip over to Garrison bay and found a much quieter setting.  This is what peace is all about. 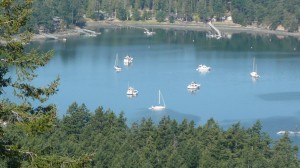 Having cleared customs without incident at Roche Harbor, we decided to try out Reid harbor.  Usually one of my favorite places in the islands.  I’ve never seen so many boats in Reid Harbor before.  We ended up putting down the anchor only about a quarter of the way into the bay, the entire rest of the anchorage was packed.  It looked like a small city at night.

Jollymon decided to stop by and raft up for the night.  We took the dingy’s out later that afternoon for a circumnavigation around Stuart by dingy.  Probably one of the best dingy rides of the season.  We saw all sorts of wildlife, the remnants of the fire being knocked down by the local fire crews and later I had a pod of fast moving orca whales surface within about arms reach before dissappearing again.  Too fast to get a picture of them. 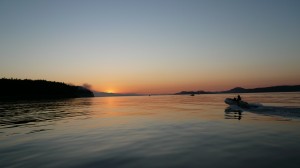 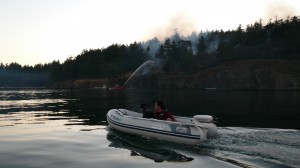 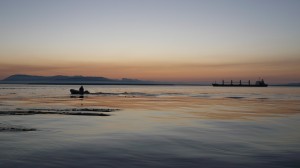 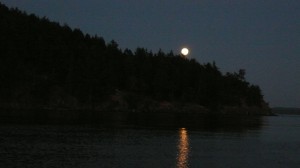 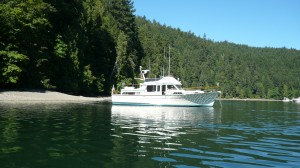 Departing Ladysmith around 10:30 we ran just under 5 hours down to Tod Inlet.  I want to get back on our anchor, which has not been getting as much use lately as I had planned due to all the windy weather we have been having.

Arriving in Tod, I picked out a nice spot and we quickly had the hook down, along with a stern line.  A quick dingy trip and I discovered that we were not alone. 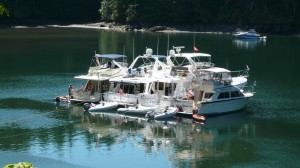 We ended up spending two nights in Tod Inlet and once again I have to say that I love the place.  We took the dingy and had dinner over in Brentwood bay, where the rest of our friends went and stayed for another night.  We decided to move ahead and decided to cross back over to Roche and clear customs. 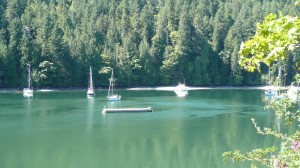 Ladysmith is a great little town, though it is a bit of a walk up the street to get there.  We had lunch at the bakery and picked up some meat pies at the butcher shop.

Having spent an absolutely perfectly quiet night in Smugglers bay, we departed at 8:30 for our crossing back over the Straight of Georgia.  This could be a very long post, but I’ll summarize as follows since it is almost the same as our prior crossing except we had the weather on our stern this time:

Otherwise, it was a repeat of the conditions we had previously.  Halibut bank reported 6 foot seas.  It does not look like much through the window, but I assure you that in person it looked a bit more ominous! 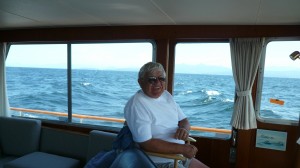 We spent the night in Silva bay.  We had planned to anchor but the bay was absolutely chock full of anchored vessels, most of them either derelict or without anyone on board.  Makes you wonder and the marina was not cheap.

After a nice later morning departure from Egmont, we made the easy trip down to Smugglers cove where we anchored with a stern tie to the rocks.  I’ve seen pictures of larger vessels than mine own on the cover of Northwest Yachting, but from a 1st party perspective I have this to say.  HOLY COW THAT’s A TIGHT ANCHORAGE!!!!

The place is tiny, albeit well protected from most directions.

Shortly after we were in and settled, a guy comes in on a sailboat, anchors right on top of us (like most sailboats) and then starts loudly complaining about the fact that I’m running my generator.  It’s 3pm for crying out loud, and the generator is not going to get turned off until that wonderfully smelling bird roasting in the over is done.  Cliff had the bright idea of starting up the mains and letting him smoke on that.  Honestly, some folks just go out of their way to find a problem.

The thing is, there are a lot of sailors out there that for some reason look to find fault in any powerboater they can find.  Make no mistake, there are enough of the know nothing cocktail cruiser crowd to feed into the stereotype, but something in the sailing culture goes out of its way to try to cause problems and today I’m next to one.  Egads!

In the end, the chicken came out of the oven, the generator was shut down and our formerly feathered freezer food was devoured with the utmost zeal, alongside a perfectly shaken gin martini with two olives. 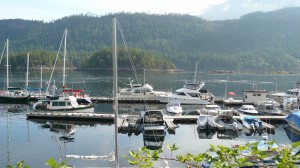 Upon arriving at Egmont, I thought that I had never been to this particular marina before.  It’s a nice place, great pub, good food and had some rather familiar looking cabins on the shore as well. 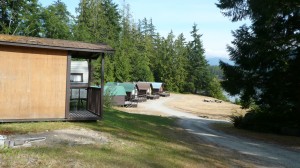 Exploring further I ran into this little door, at which point I had to say that I stand corrected.  I HAVE been to Egmont before!!! 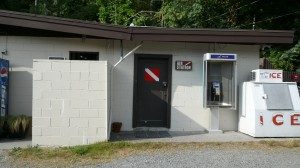 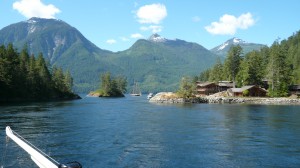 24 years ago I very nearly had the opportunity to see Princess Louisa Inlet, but a trip to Malibu via Young Life fell through.  Today will be the day that I see Malibu Rapids and Chatterbox falls for the first time and upon my own vessel.

We departed at 5:20 as we will need to make Malibu rapids at slack and I expect a 5 hour run up at a fuel efficient 8 knots.  Words really can’t describe the beauty of this land.  The most I can say is that the description of Princess Louisa is not oversold.  If you have never been, you need to. 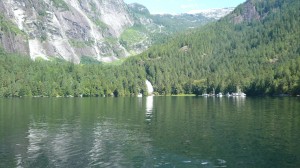 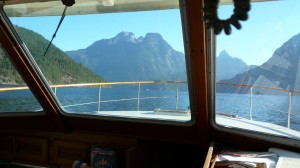 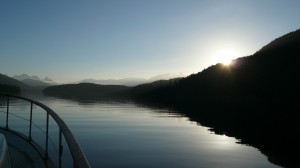